I once read a very simple quote.

“Rubbish is a human invention”

It took a moment for me to really absorb.  All those animals, from single celled bacteria right up to tool using chimpanzees, don’t produce any rubbish. They’ve accomplished something we seemingly can’t: They live a one hundred percent sustainable life. Everything they use is returned to nature, whether it’s the tools some animals use or the waste they all produce, even their own bodies, all of it is recycled and reused.

Now some might argue that our society is more technologically advanced then other animals and that necessitates or justifies some rubbish. But there is nothing advanced about producing, for example, a bottle that’ll outlive you by several generations all so that we can have a once off drink of water. Especially when that bottle goes on to poison and kill other animals.

I tend to get pretty passionate about conservation. To that end I spent a long time thinking about how can I effectively communicate that every single one of us (myself included) needs to do better at reducing, reusing, recycling and ultimately eliminating our rubbish.

I could quote all the scary statistics on how eight millions of tons of plastic enter our oceans (https://oceanservice.noaa.gov/hazards/marinedebris/plastics-in-the-ocean.html), and how that plastic is  likely ending up inside our bodies (https://www.national geographic.com/environment/2019/06/you-eat-thousands-of-bits-of-plastic-every-year/ ).

I could talk about recent recordings in the Pyrenees mountains in France where they found microplastics literally falling from the sky at a rate of three hundred and sixty-five particles per square meter (https://www.nationalgeographic.com/environment/2019/04/ microplastics-pollution-falls-from-air-even-mountains/). But people share statistics and facts all the time and it doesn’t seem to accomplish much. Instead I thought I’d share a more personal, local, experience I had recently.

I was down at Lake Monger for a walk one afternoon. It’s one of my favourite spots to go after work. At one point I saw an older couple watching something on the water intently. I’ve sometimes seen turtles and other interesting animals at the lake, so I went over to investigate, and saw this. 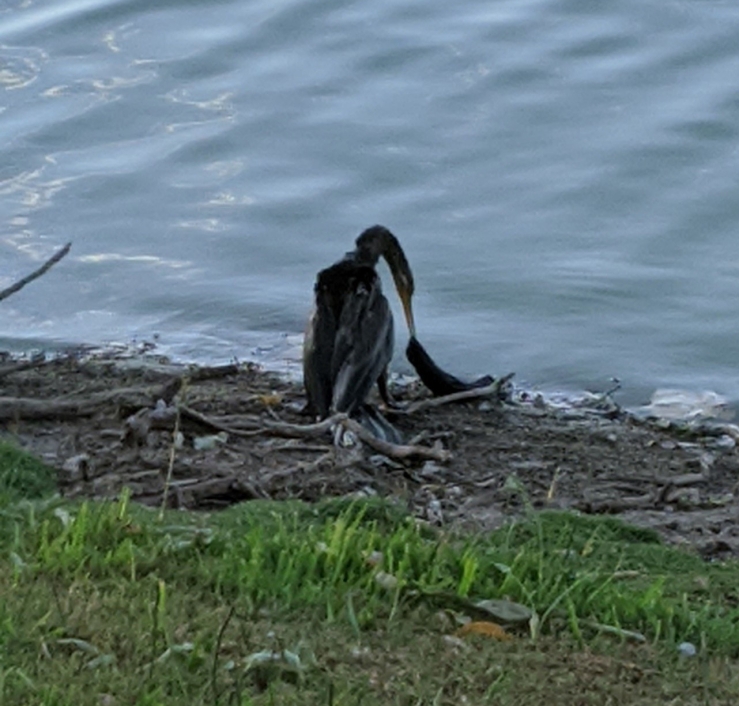 Now the picture quality isn’t great but that’s an Australasian Darter with what I would later learn is a sock tangled around is beak. It was a thick wool sock and some of the threads were tangled in and around the serrated edges of the bird’s beak. It was alternating between sitting on the shoreline and swimming around thrashing its head around trying to dislodge the sock. It was panicked and clearly exhausted.

Darters are a wetlands bird that likes to live around lakes, rivers and swamps. They can dive under water where they spear small fish with their beak or flick larger ones up to the surface where they can try to swallow them headfirst.

This goes some way to explaining how this all happened. The bird was likely diving, saw the dark shape of the sock in the water, mistook it for a meal, grabbed it to flick up to the surface only to get trapped. Because its beak is serrated, once caught, there was little chance that the bird would’ve freed itself.

Thankfully, I was able to get in touch with the team at Western Australian Seabird Rescue (https://www.facebook.com/wasr.org.au/) who were able to get two volunteers down to rescue the bird, untangle it, and take it away for overnight observation.

As I left the park, I picked up any rubbish I saw.  Rather than thinking about statistics, I was really associating the rubbish problem with that panicked bird desperately trying to free itself, all because someone was thoughtless with their waste. Sadly, I found a lot of rubbish. 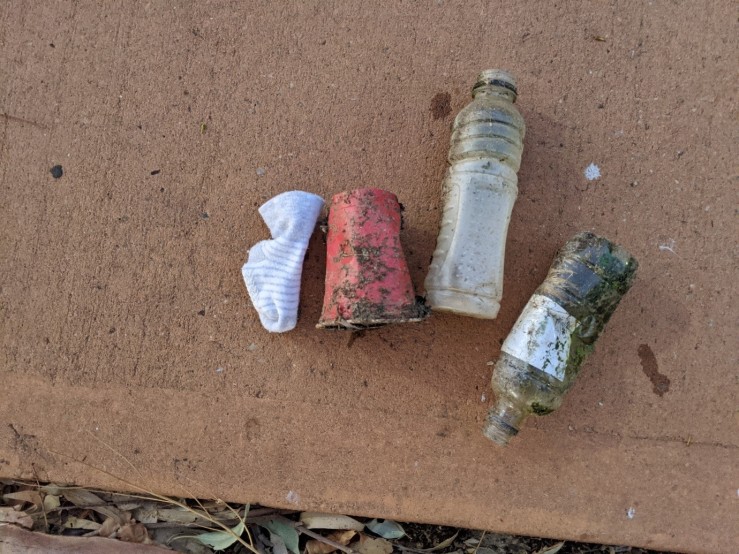 To be honest I wasn’t surprised having regularly seen rubbish like this at Lake Monger and other locations. I decided to check out WASR’s Facebook page and found that they’d rescued three other Darters from Lake Monger in the past month (not to mention numerous other trapped birds from all over Perth).

It was depressing to say the least, but in a weird way, that’s sometimes what you need. Numbers and graphs can make you think but they don’t illicit emotion in the same way that panicked animal did for me. One look at the WASR Facebook page reinforced what I’d been thinking for a while, that Perth (and wider Australia) have a problem with rubbish.

We can push for governments to recycle waste in Australia rather than shipping it overseas but ultimately, I think the solution starts with us. By reducing the amount of waste, we produce, through composting or better product choice. You can also get involved with private recycling initiatives like Teracycle (https://www.terracycle.com/en-AU). At the very least we can all try to ensure rubbish ends up in a bin and not out in nature. This can apply to your own rubbish, but it can also apply to something to see out in the world. Every time you overcome that gross factor and pick up that plastic bag or bottle or chip packet you see on the street or in the park, you’re stopping it spending the next several hundred years out in nature potentially poisoning, choking and killing wildlife like the Australasian Darter.